Tutorial for how to create tomcat image with Dockerfile.

Docker can build images automatically by reading the instructions from a Dockerfile. A Dockerfile is a text document that contains all the commands a user could call on the command line to assemble an image. Using docker build users can create an automated build that executes several command-line instructions in succession.

In posting Serving JSP Application With Tomcat In Docker and Enabling Tomcat Debugging in Docker for Eclipse, we deployed the JSP Tutorial application to Tomcat container with enabling the remote debugging. Below is the command we used.

What is this command doing?

In this posting, we will use Dockerfile to create a tomcat image with the same configuration mentioned above. Before moving forward, make sure you’ve already setup folder ~/Documents/jsptomcat in local machine, which will be volumed to tomcat container later. And all jsp and class files have been deployed into this folder.

Create one file named Dockerfile in any directory on local machine.

The following points need to be noted about the above file.

Open Docker terminal, navigate to the folder where the Dockerfile locates. Run the following command.

Here, jsptomcat is the name we are giving to the Image and 0.2 is the tag number. The last dot . indicates the current location. Check whether the image is created.

As you see, the new image is created with tag 0.2. 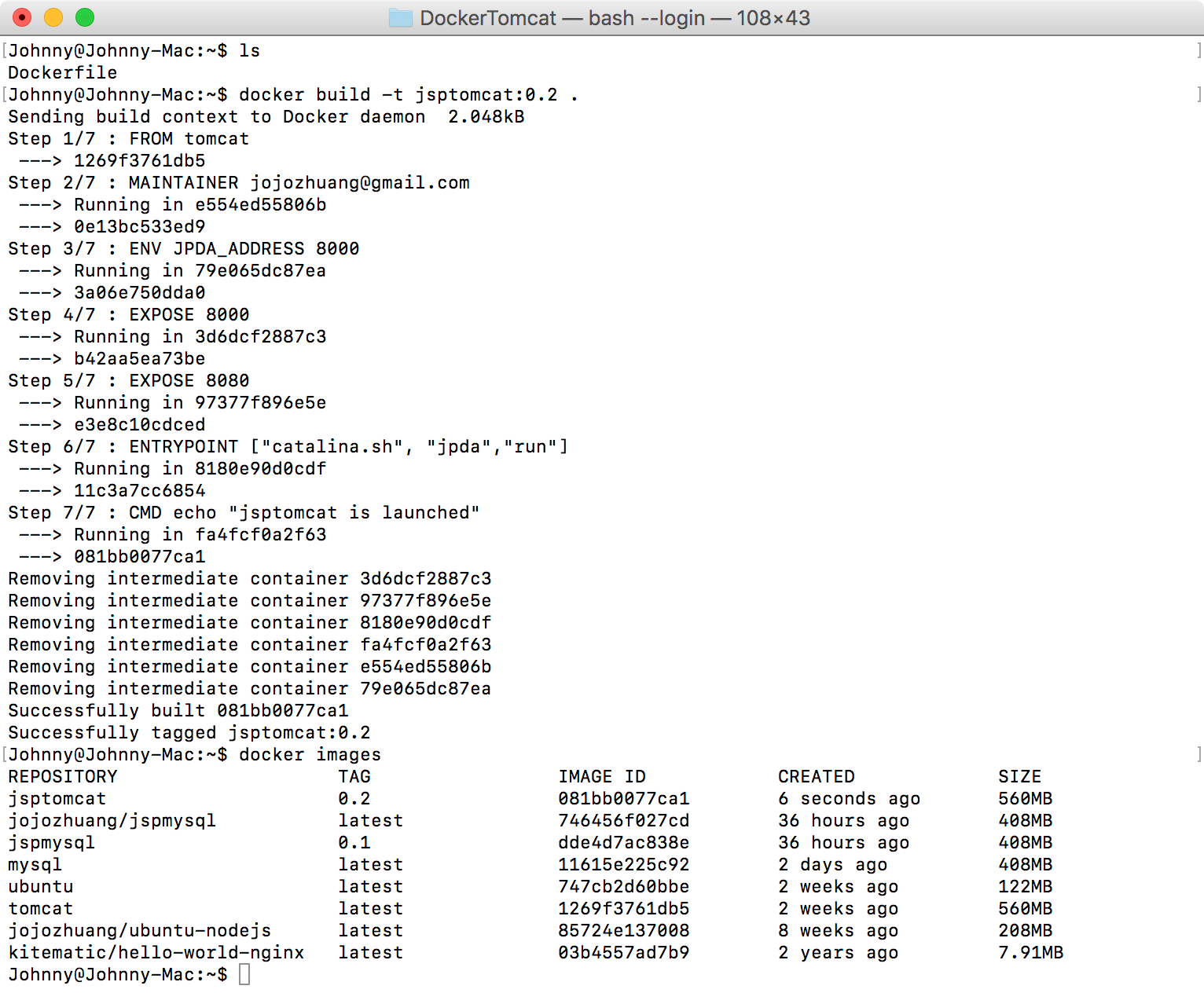 In docker terminal, run the following command. (Make sure remove the tomcat container we created before.)

Notice we don’t need to set the environment variable JPDA_ADDRESS, and execute catalina.sh jpda run any more. They are already set in the Dockerfile.

A tomcat container named jsptomcat is running now. Notice, its source image is ‘jsptomcat:0.2’. And environment variable JPDA_ADDRESS has been added to the container. 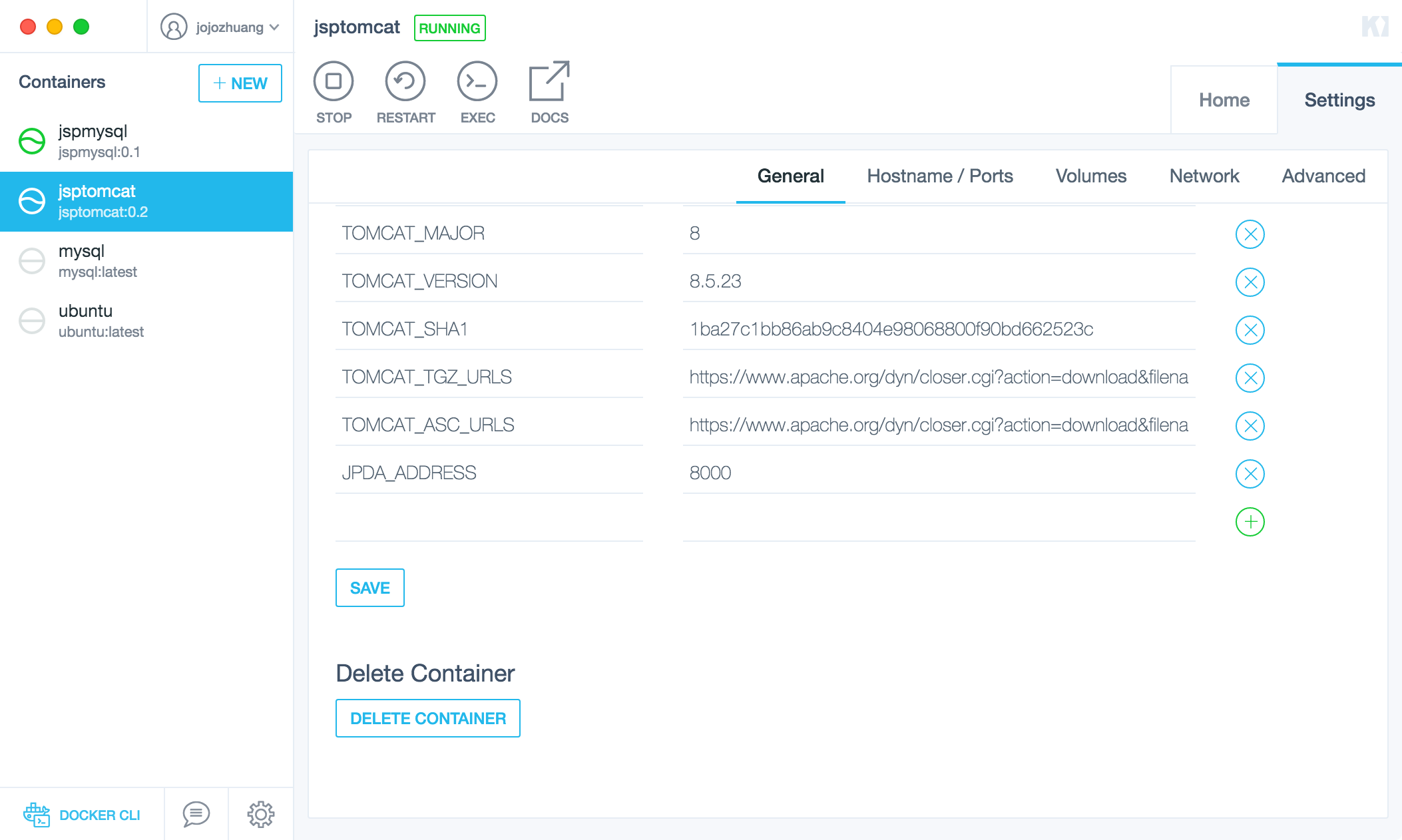 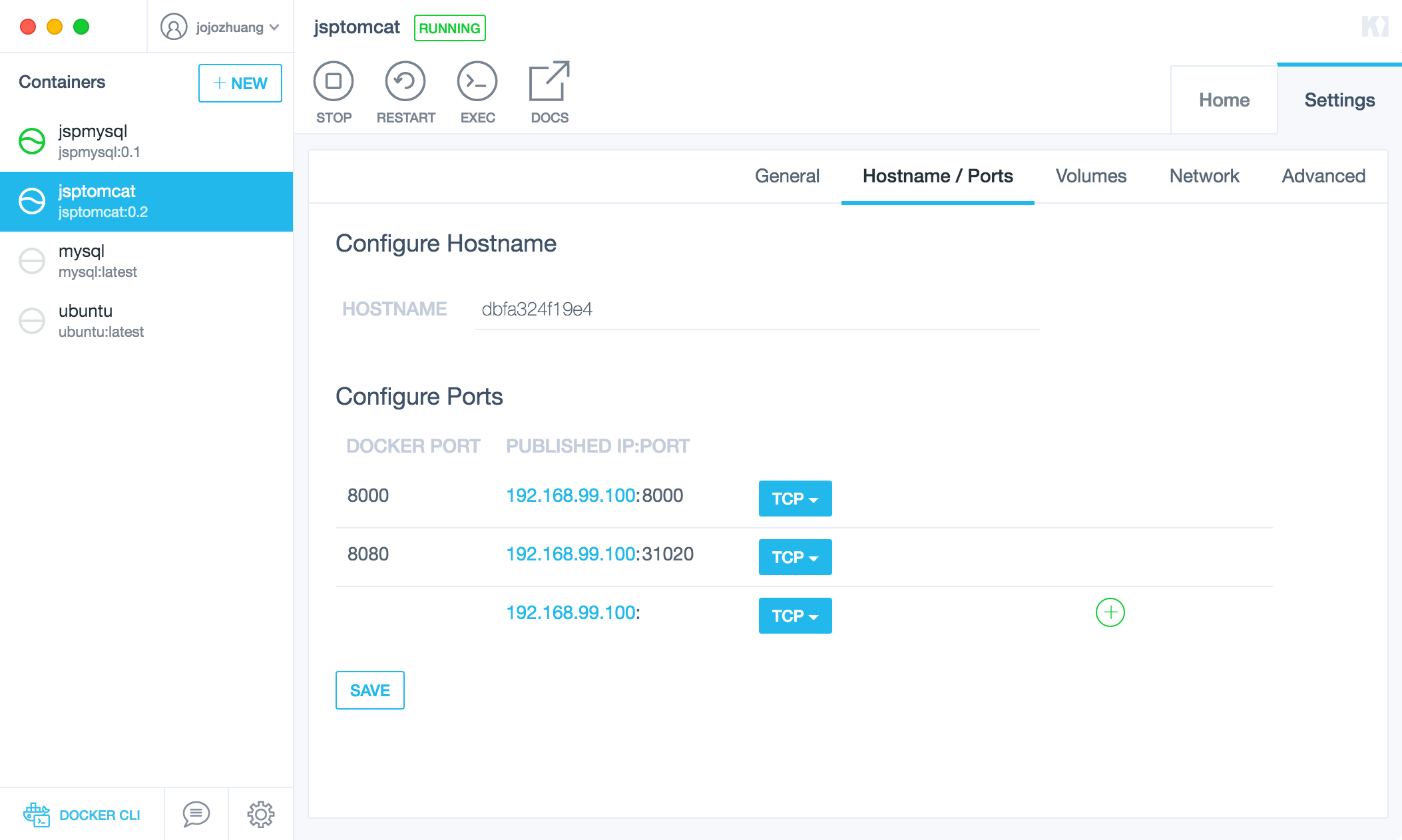 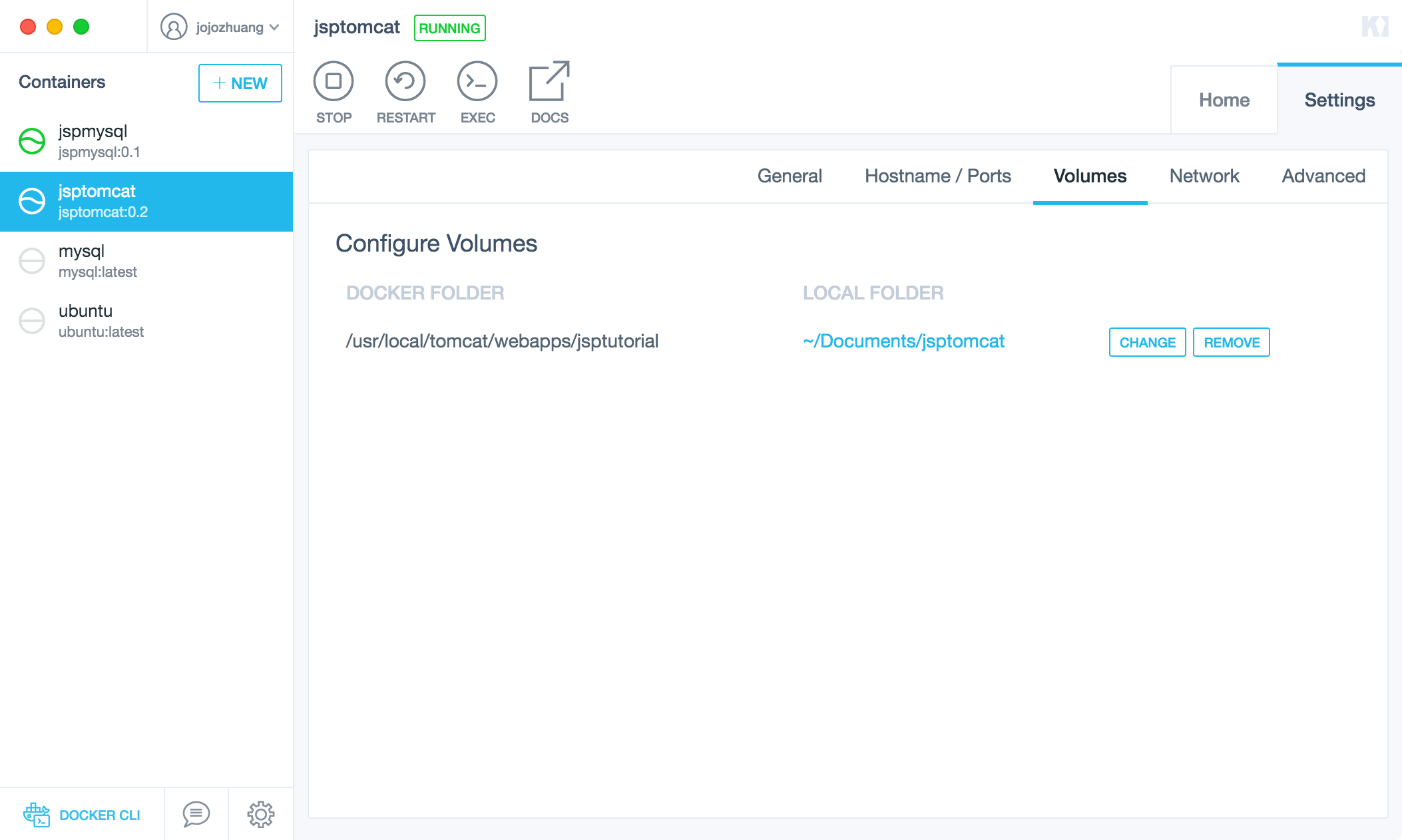 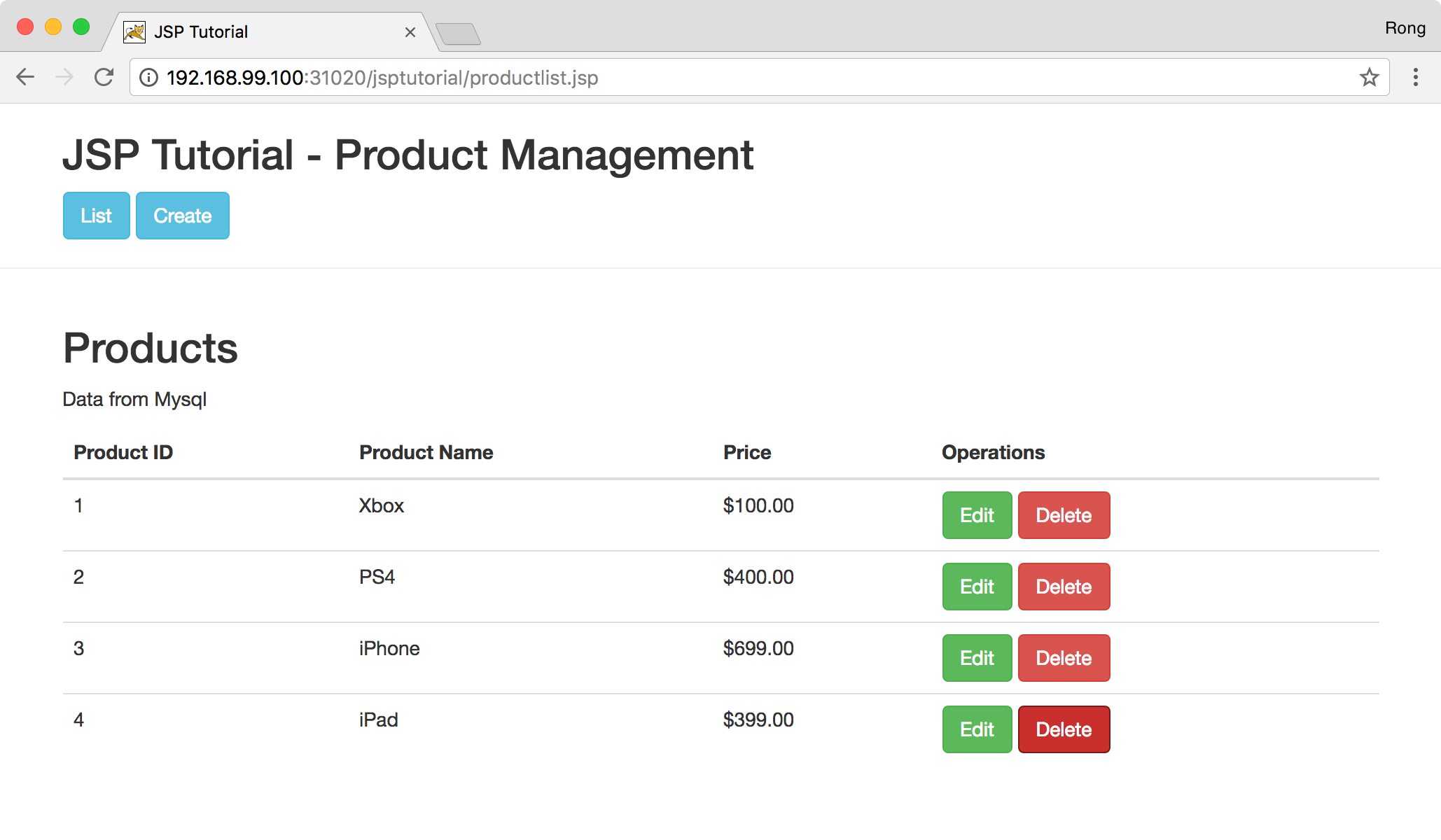 In Eclipse, enable debugging and set breakpoint to productlist.jsp. Refresh the page in web browser. Switch back to Eclipse, the breakpoint is activated. The remote debugging function is working now. 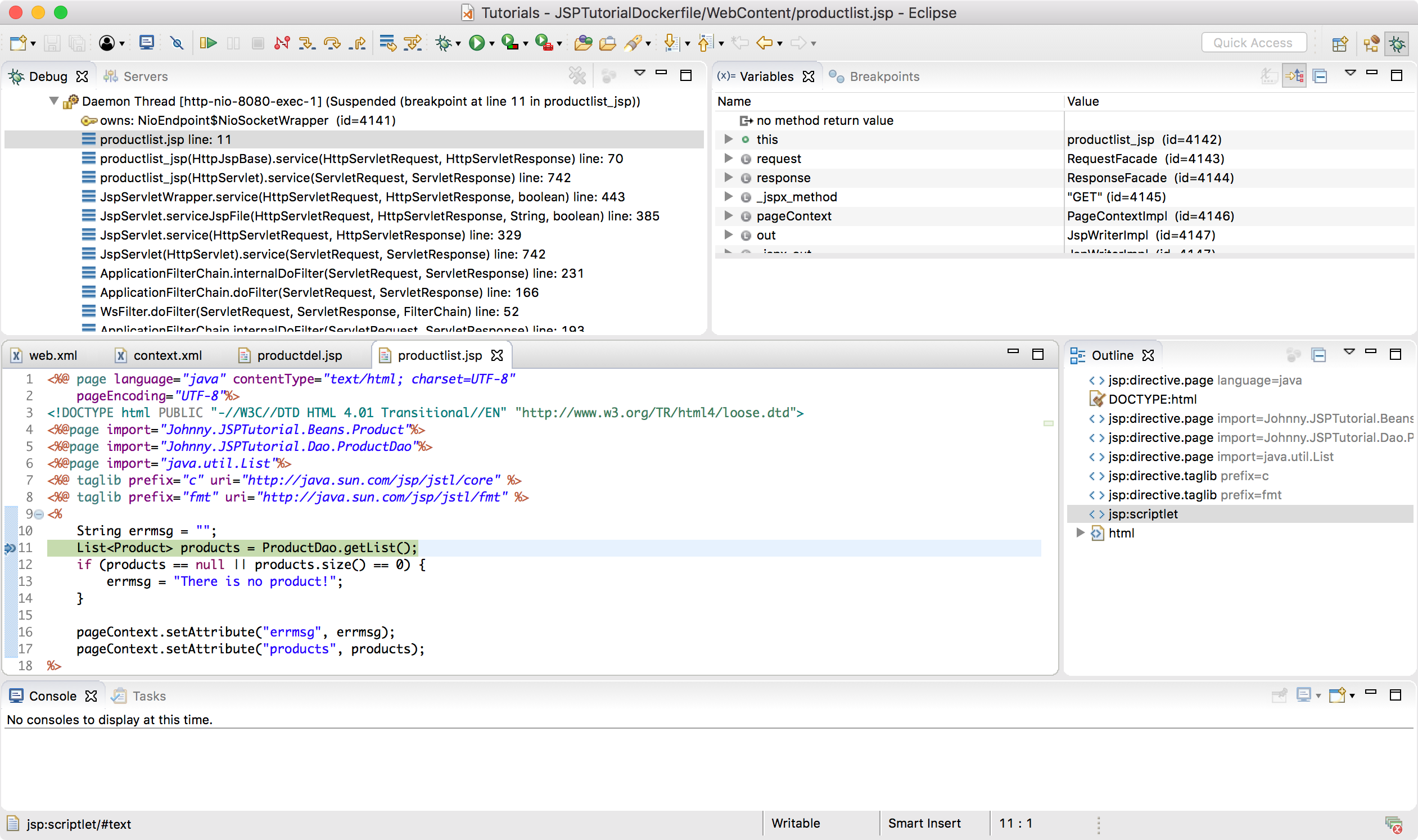